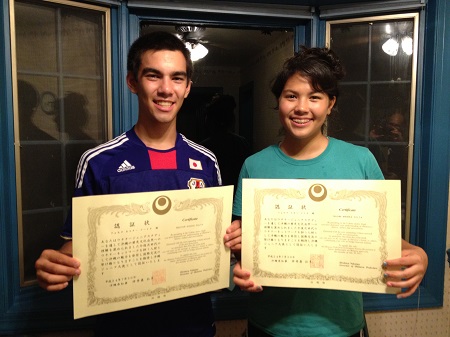 The Junior Study Tour is a program sponsored by the Okinawa Prefecture Government to provide Okinawan as well as overseas students with learning experiences regarding history, culture, and Okinawan natural environment, and to promote better understanding of Okinawa among young students who will contribute to advancement of Okinawan society of next generation through the Uchina network.

The Junior Study Tour takes place during the summer and consists of one week homestay, one week sponsored activies such as visits to Okinawan historical sites, traditional crafts, performing arts, studying indigenous  plant and animal life, and touring government buildings. Uchinanchu youths from various countries around the world are joined by local Okinawa students during the tour.

Candidates must be of Okinawan descent, between the ages of 13-18, be in good health and be nomiated by their Okinawan Kenjinkai.

The Okinawa Kai of Washington D.C. is proud and honored to have so many of its’ young members selected for this program over the past years.

The Okinawa Kai is a 501(c)(3) nonprofit organization which makes all donations to us tax deductible. Your donation allows us to support events such as the Shin Nen Kai, Shin Shun Kai, Autumn Picnic and other special events as well as offer scholarships and educational opportunities to our members. These donations help preserve and spread our Okinawan culture to the next generation and the local community. We thank you for your support!!!